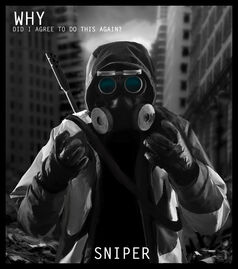 Mr. Snippy's headgear consists of a gasmask with two filters and a goggle with blue glasses and goggle-caps. He is probably wearing a shroud as well, but it is constantly covered up by the hood of his jacket. The jacket has a black and white pattern, several pockets and shows a small (Good-Directorate) G-emblem with the label 'fireproof' on the left front side. Aside from that Snipopy wears a black shirt and black pants as well as black boots and gloves.

He usually carries a rifle around, Captain's shopping lists, a 'propperty of Captein' note and a pocketknife. He briefly had a 'bag of cancer summoning' and a half destroyed cellphone in his possession as well.

Similar to Captain, he seens to have a very uncommon luck, though it doesn't tends to bring him solutions, it at least allows him to survive all odds, from crashing rocket-subways to deadly wounds, even when it includes completly illogic events to make it happens.

He seems well versed in survival skills, able to survive for undefined time inside a whale and keep surviving in the nuclear-hazard city. He most likely learned his survival skills, such as tracking, in dead zone training.

Snippy's gas mask is a running gag, expecially around the readers, as it seens to represent his emotions with the googles having an extra pair of lens that's always left opened in a 90º angle and they act as his eyebrows, making all his expressions, since the gas mask conceals 100% of his face.