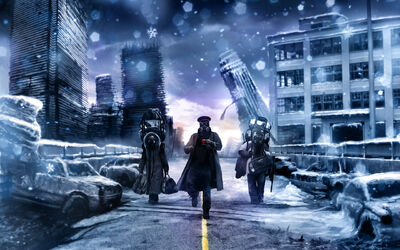 The story takes place in a post-apocalyptic future. It follows the characters Captain (Subject 7), Sniper (Charles Snippy), Pilot (Christophorus Hatchenson) and Engineer (Alexander Gromov) in their lives in the wastelands. According to the printed version of the comic:
Romantically Apocalyptic is a high-detailed graphic novel that combines delicious servings of: end of the world / life in a dark post-apocalyptic dystopia, and twisted humor.

Retrieved from "https://romanticallyapocalyptic.fandom.com/wiki/Romantically_Apocalyptic_Wiki?oldid=5637"
Community content is available under CC-BY-SA unless otherwise noted.