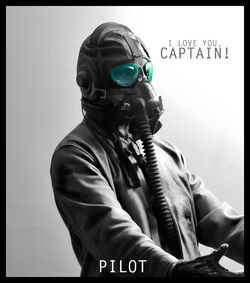 'Pilot' is the third main character of Romantically Apocalyptic. He is also one of the four original main characters, the others being Captain, Sniper, andEngineer. Out of all three, Pilot is the most mentally unstable, subject to surreal fantasy and daydreams. It was revealed in a diary entry that he was once a fighter pilot.

Other than aircraft and flying, Pilot's obsessions include tormenting Sniper and serving Captain. He often hallucinates, viewing himself in a terse dogfight high in the air when in fact flying around a toy plane he discovered. He is infatuated with Captain, and believes that Sniper wants to steal Captain from him. He often devises ridiculous schemes to get rid of Sniper, including a plot to feed him to a gigantic fish. It is assumed that he is European or possibly American, but it is unclear. He found a name on the inside of his jacket called "Christophorus Hatchenson" but it is unknown if this is in fact his real name, due to his mental state, and it could really just be a jacket he found somewhere. However, it is also seen here that these two figures call him "Mr. Hatchenson." He tried to create a "Church of Captain", and tied Sniper to a couch because he wouldn't join.Snippy states in one of his journals that Pilot was once in the army, although he would probably be discharged due to his mental instability. Pilot also writes that he once had a "Blue Tiara", a headband Civilians wore to access ANNET, but he broke it because "It was a ticket. A one-way trip without a return policy". It is possible that Pilot's mental state is a direct result of him breaking it before ANNET Could fully take over his mind, resulting in mental damage.

In all of his appearances, the Pilot wears a leather jacket, a vest, and a gas mask with a tube running to an unseen location beneath his coat. His goggles are green, and green is the color associated with him. He has wielded a Sharpened Katana to chop off the limbs of the monster known as "Cancer".

Pilot is also known to have a stuffed toy puffin friend called Mr.Kittyhawk. Mr.Kittyhawk has proven to be a traitor though, as he sold out Pilot's location to the alien monster Cancer - or that's at least how Pilot saw the situation.

A tag on his jacket says SG Christophorus Hatchenson

SG could be the wrong abbreviation of "Sergeant"

SG could also mean Star of Gallantry, a military decoration awarded to members of the Australian Defense force

or other persons who have shown acts of great heroism or conspicuous gallantry in circumstances of great peril during action. Pilot's rank would not matter, as the SG can be awarded to any personnel.

If this is correct, it means Pilot could be Australian and has done something extremely heroic and brave in his past

A recent illustration has shown that pilot might be blonde, but this picture seems to be the work of a RA fan and not drawn as pilots real appearance.

Aside from his presumed flying skills, Pilot has been shown to have the ability to jump ridiculously high and far. He displayed this ability in his attempt to rescue Sniper from the clutches of Cancer. In addition, he is skilled with a sword and was able to cut off a few of Cancer's tentacles before being captured and trapped with Sniper. Snippy thinks that Pilot attained these skills while in the army.

Pilot's role in the main storyline is supposedly that he was a jet fighter pilot who dropped atomic bombs on ANNET based off of Engineer's orders, based off of a diary entry

This might perhaps contribute to understanding some of his mental instability a bit more; assuming he was relatively sane while in the army, he mentions in the diary entry that the "one million voices of Eureka still sing in my cranium. They asm me to stop... I know that they are all just dust now, and what has been done cannot be retracted." This referes to the fact that while wearing ANNET's headband during his mission at Eureka, Pilot was actually able to perfectly hear the people he bombards.

The top panel in comic 62 might also refer to his discharge from the army and his interactions with Captain, as he is holding either a picture of captain or he is video-chatting with him. One picture refers to him possibly being arrested.