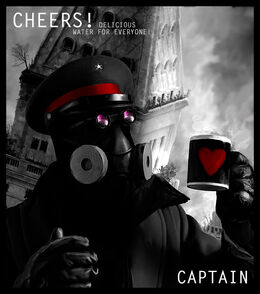 Zee Captain is clad in a heavy black trenchcoat, black leather boots and black leather gloves. A black gas mask with dual filters and pink/purple goggles obscures his face, and a Commander's Hat rests upon his head with a red band around it, ornated with a single, silver star. Captain is nearly never seen without his trademark Mug, which has been known to contain various liquids ranging from tea to water to sugary death water. Captain drinks it without removing his mask with a straw.

Later he acquired what seems to be the flesh of the apocalyptic alien creature known as Cancer and uses it as a scarf around his neck.

Captain's primary weapon, if it can be called that, is his coffee mug filled with scalding to scorching tea. He has at least once used it's incredibly hot contents to disable an alien robot. According to Snippy's journal, Captain has also used it to threaten subordinates into submission when they refused to carry out a particular mission. For a brief period, Captain was in possession of a slice of very stale - and presumably radioactive - cake. When threatened, Captain was able to throw this cake with enough force and accuracy to kill an alien invader through its helmet. Captain is also shown to have a "magic satchel", often pulling things, such as a mustache over his gas mask, out of nowhere.

The evil mastermind behind the assassins might be the ANNET, or it could be a new yet unknown enemy

Retrieved from "https://romanticallyapocalyptic.fandom.com/wiki/Captain?oldid=4738"
Community content is available under CC-BY-SA unless otherwise noted.